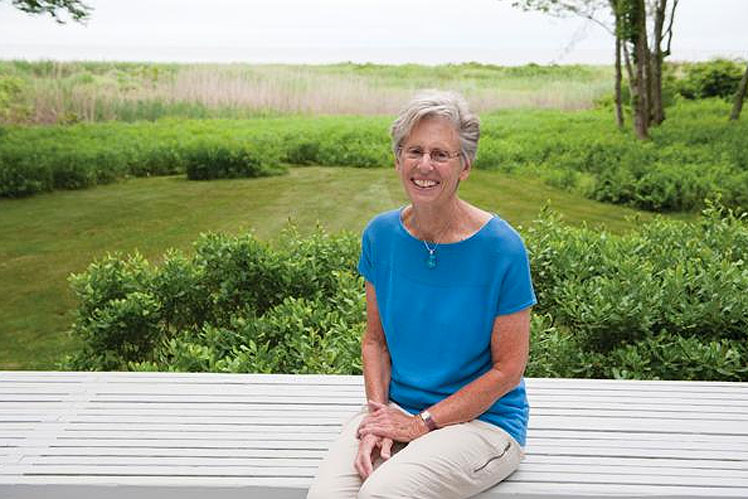 “Mary O’Connor has a mission — to spread more joy in the world. But it is a mission as gentle and unassuming as the Old Lyme resident. The writer, poet, painter, and nature lover doesn’t lecture or insist that there is any one way to live a more joyful life, but instead, she stresses how important it is “for all of us to have our minds open to joy and all the beauty that’s out there.”

• To read the complete article that appeared in GRACE: A MAGAZINE FOR WOMEN, click here.

AUTHOR’S ART ON COVER OF NEWSPAPER MAGAZINE
Painting is another of Mary O’Connor’s favorite pastimes. Her watercolor of an American bison was featured by The Hartford Courant as its September 26, 2010 iTowns cover art.

Old Lyme Author Presents Literacy Program Award
More than 100 members of the Greater Hartford community gathered November 29, 2009 at Trinity College for “Building a Community of Readers,” an event celebrating literacy and local volunteers making a difference in Hartford through literacy outreach. Elementary school children and their parents, college students, faculty, and staff, literacy advocates and volunteers, and other interested members of the Hartford community attended. The event was made even more timely, as many in the audience noted, because of the recent release by the National Endowment for the Arts of a new study showing “startling declines in how much and how well Americans read.”The idea for the celebration of literacy and literacy volunteers at Trinity was suggested by Old Lyme poet and painter Mary O’Connor, former director of communications at Trinity.  A champion of literacy, O’Connor is donating all proceeds from the sale of her recently published book, Dreams of a Wingless Child, to the Freedom Writers, the group whose story was told in the movie of the same name, starring Hilary Swank. In so doing, as with the November 29th event, O’Connor hopes to reinforce the power of writing for youngsters to achieve their dreams and to decrease high school dropout rates.

Giving Wings to a Voice Inside: Old Lyme Woman’s Poetry to benefit Freedome Writers
“For a woman who is good with words, who has made them her life, Mary O’Connor is at a loss for them when talking about Maria Reyes. “I can’t describe her – because you can’t.” She looks down at the floor, out her window of her Old Lyme home to the marshes and the sea beyond, and finally finds the right way to describe Reyes, one of the Freedom Writers, a former student in a struggling California school system who turned her life around through journal writing.” (Lyme Times, by Sharma Howard, Times Arts Editor, May 24, 2007.)

Old Lyme Author’s Book Recognizes the Power of Writing to Achieve Dreams
“Writing,” says O’Connor, “has always provided me with a means of channeling thoughts and observations in ways that open my mind to new possibilities and connections. My hope in dedicating Dreams of a Wingless Child to the Freedom Writers is to reinforce their recognition of the power of writing to deal with adversities faced in daily life, and in so doing, to support them in their goal of achieving dreams for themselves and the world.” All proceeds from the sale of the book are being contributed to the Freedom Writers Foundation, which seeks to decrease high school dropout rates throughout the United States through the replication and enhancement of the Freedom Writers teaching method. (The Post Road Review, June 2007) Read the complete article (PDF).

A Time To Write
“Mary O’Connor has more time for writing poetry these days. She’s retired from her career in public relations and advertising for ConnectiCare, Trinity College, and writing for the Hartford Times…Her latest poetry collection, Dreams of a Wingless Child, is published by Wheatmark ($11.95). Profits from the book are going to Freedom Writers, the group founded by Erin Gruwell, whose story was told in the movie of the same name, starring Hilary Swank. Gruwell and Maria Reyes, one of the original student writers from the group begun in Los Angeles, spoke at the Bushnell Center for the Performing Arts about the writing experience.” (Hartford Courant, Donna Larcen, April 22, 2007)